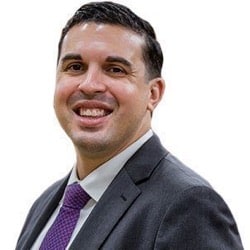 Since joining the firm in 2008, Attorney O’Neill has taken the lead on some of the Firm’s most complex and sensitive cases in all areas of the Firm’s legal practice, including criminal defense, civil litigation, employment law and appeals.

He works as an adjunct professor at Quinnipiac University School of Law, where he serves as trial instructor for Quinnipiac’s award-winning mock trial program.

J.D., Quinnipiac University School of Law, 2008
Graduated with honors. President of the Mock Trial Society, 2008 regional championship team for the National Trial Competition where he was awarded best individual advocate. At Quinnipiac Law, Ryan earned a number of academic awards.

Contact Us
Practice Areas
Client Reviews
★★★★★
I found Mark Sherman after doing an extensive search for DCF attorneys on the internet. He is without a doubt the most honest and straightforward attorney I have ever met. Rather than trying to push us towards an expensive engagement he quickly addressed our issue with a recommended course of action. My wife and I left his office feeling much better and confident in our situation. His fee was well worth the investment and I highly recommend his services. Robert E.
★★★★★
Submit a Law Firm Client Review