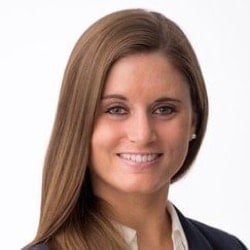 Since joining the firm in 2014, Christine’s advocacy has led to the dismissal of over 100 felony and misdemeanor cases. She regularly appears before Connecticut’s state and federal courts representing clients in a variety of cases.

She is also experienced in representing clients in front of state agencies, including the Department of Children and Families, the Connecticut Office of Early Childhood, and the Department of Public Health to name a few.

Christine has served as a mock trial coach at Quinnipiac Universiry School of law and has been recognized as a top lawyer in the community by a number of organizations including Super Lawyers* and the Connecticut Law Tribune.

* Super Lawyers is a commercial publication, for information on how recipients are selected, click here.

Contact Us
Practice Areas
Client Reviews
★★★★★
I found Mark Sherman after doing an extensive search for DCF attorneys on the internet. He is without a doubt the most honest and straightforward attorney I have ever met. Rather than trying to push us towards an expensive engagement he quickly addressed our issue with a recommended course of action. My wife and I left his office feeling much better and confident in our situation. His fee was well worth the investment and I highly recommend his services. Robert E.
★★★★★
Submit a Law Firm Client Review